In this article, we will learn how to use Normalization to design Database efficiently. Let’s get started.

According to the definition of Database Normalization on wikipedia.com, we have:

So, database normalization is utilized to reduce data redundancy and improve data integrity.

But in this article, we will focus on three normal form, these are 1NF, 2NF, 3NF.

Some steps for 1NF:

For example, assuming that we have a table Order that is described in a below image.

We can easily find that the repeating group - (item_name, item_number, item_price) is repeated in 10 times.

So, the 1NF satisfies when our table does not have the repeating groups.

This 2NF will be applied into a composite primary key that has multiple fields.

Some steps of 2NF:

For example, assuming that we have a table Student. 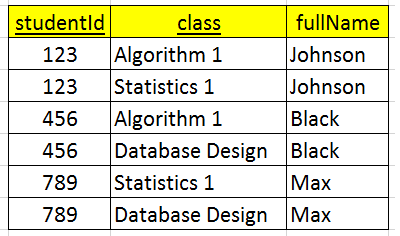 Based on an above image, we can find that:

To apply this 2NF, we have:

So, the 2NF satisfies when:

Some steps of the 3NF:

Then, we have an image:

It has a dependency: author –> born.

So, the 3NF satisfies when: