In this article, we will find something out about Dependency Inversion Principle. Let’s get started.

These classes are coupled either strongly or loosely, but let’s see a concrete example. 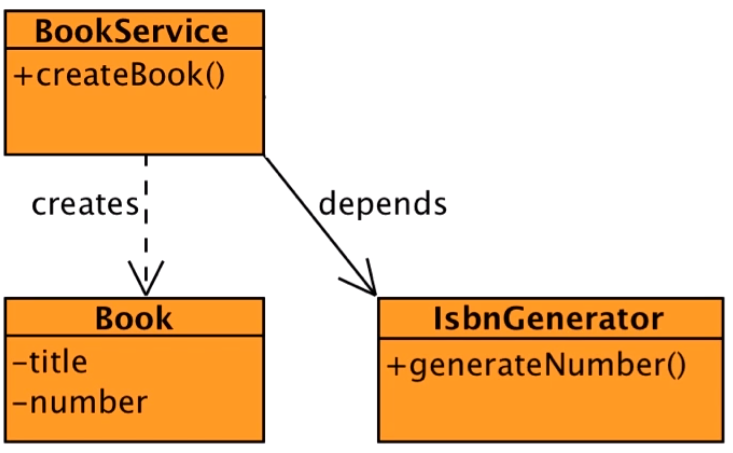 Here we have a class, BookService, whose job is to create books. A book is represented by a book class that contains the title of the book and a number. This number is actually an ISBN number generated by an IsbnGenerator class, which has a method called generateNumber().

In the above diagram, BookService depends on an IsbnGenerator to create a book. Without an ISBN, the book could not be created. This dependency between classes is typical in object-oriented design. Classes have separate concerns.

The dependency Inversion Principle states that:

With the definitions of DIP, we have some questions such as What is high-level module or a low-level module?

Let’s take a look at how this principle actually works. Traditionally, when we depend on details, our components tend to look like this. We have high level components, which directly depend upon low level components. Of course, this violates the dependency inversion principle because both should depend on abstractions.

Dependency Injection is very used in conjunction with the Dependency Inversion Principle. However, they are not the same thing. Let’s look at how we left the PaymentProcessor class.

Inversion of Control can help us create large system by taking away the reponsibility of creating objects.

Inversion of control is a design principle in which the control of object creation, configuration, and lifecycle is passed to a container or framework.

The control of creating and managing objects is inversed from the programmer to this container. We do not have to new up objects anymore. Something else creates them for us, and that something else is usually called an IoC container or DI container. The control of object creation is inverted. It’s not the programmer but the container that controls those objects. It makes sense to use it for some objects in an application like services, data access, or controllers.

However, for entities, data transfer objects, or value objects, it doesn’t make sense to use an IoC container. We can simply new up those objects, and it’s perfectly OK from architectural point of view.

There are many benefits in using an IoC container for our system.

There are many ways to configure an IoC container in Spring. XML is one example.Creating configuration classes is another. Or simply by annotating classes with special annotations like @Service, @Component, @Repository, …

This is the last section of SOLID principles. So, we will conclude benefits when using SOLID in our code.