In this article, we will find something out about Kafka. Understanding about the architecture of Kafka makes us coding better, reduce the number of bugs.

Assuming that we create an application that needs to send monitoring information somewhere, so we write in a direct connection from our application to an app that displays our metrics on a dashboard, and push metrics over that connections. Then we have our system looks like this: 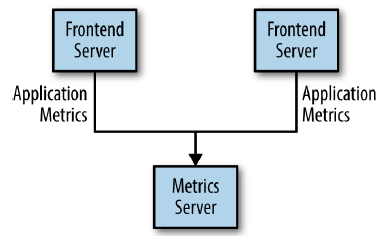 But in our system, we need to analyze our metrics over a longer terms. So we will create a new service that can receive metrics, store them, and analyze them. And other systems also want to get individual metrics and use them for various purposes. So, our system’s architecture will be described in the below image:

We can easily find some drawbacks of this architecture:

Our problems is as same as the problems of Mediator pattern. So, to deal with them, we will create a single application that receives metrics from all the applications and provide a server to query those metrics for any system that needs them. It’s called Metrics Pub/Sub for queuing data.

When we need to do similar work with log messages, because we have to track user behavior on the front-end website to collect data for working on machine learning or some reports for management, we also will create other queue system that is similar Metrics Pub/Sub.

To implement this publish/subscribe messaging system, we have Apache Kafka.

According to wikipedia.com, we have:

The architecture of Kafka

Kafka has two important components that we need to remember.