When we are working with websites, or some applications that need to save data, it means that we need to use Relational Database Management or usually called as RDBMS. Normally, we only need to understand how to use Structure Query Language SQL or to communicate with Database management system.

But in order to write sql efficiently, we have to understand how relational database works, and some steps that we must know.

The problem that was born Relational Database

Originally, databases were flat. It means that the information was stored in one long text file, called a tab delimited file. Each entry in the tab delimited file is separated by a special character, such as a vertical bar (|).

Assuming that we want to save all information about customers such as name, customer number, address, ZIP Code , all things that they purchased.

Each entry contains multiple pieces of information (fields) about a particular object or person grouped together as a record. The text file makes it difficult to search for specific information or to create reports that include only certain fields from each record.

And we have to search sequentially through the entire file to gather related information, such as age or salary. But when those who customer bought three times, all information would be duplicated. Data elements such as name, customer number, address and ZIP Code would be identical in all three records. Thus, the flat file would store the same information three times. From a storage standpoint, this is inefficient.

According to wikipedia, we have the definition of Relational database:

A database is a software that manages our data efficiently. Internally, it contains some components: 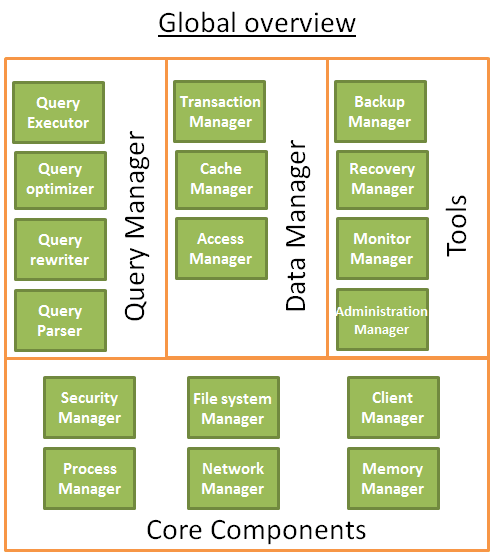 Now, we will continue look at the interaction between common components such as the Client Manager, the Query Manager, the Data Manager.

Some common questions about database

Pros and Cons of RDBMS