In this article, we will learn how to use Flyweight patter, and how to apply it in our project.

Assuming that we will create an application like editor such as visual code, notepad, … In our editor, we have multiple characters that will be duplicated, … So how do we manage all characters?

Our simple solution to support large number of objects in our application is to create an object each time it is needed.

With this solution, it is so bad because our application will take so much memory in RAM. If we open multiple editor at the same time, our computer can be crashed.

So, how do we deal with it, when each object do not change its state?

The concepts surrounding why we would choose the Flyweight pattern are when we need:

It’s a pattern of patterns, it utilizes other patterns inside of it. It uses a Factory pattern to retrieve Flyweight objects after they’ve been created. The Flyweight pattern also often encompasses both the creation and structure of the object as far as the pattern is concerned. So it has creational pattern inside of this structural pattern. It can and often does manage the entire lifecycle of the object.

Below is a UML diagram of the Flyweight pattern. 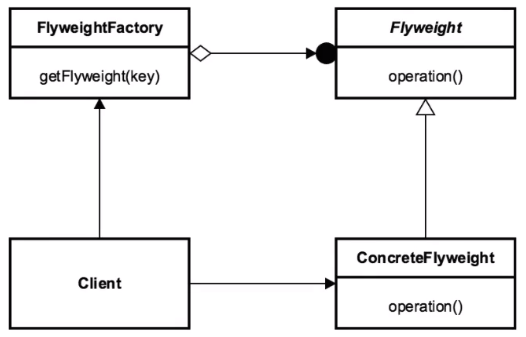 The UML of the Flyweight pattern starts with a Client class. The Client is what is requesting the Flyweight object, although oftentimes it doesn’t even know that it’s a Flyweight. It requests it from a FlyweightFactory. The factory returns the cached object or it creates a new instance of the Flyweight, eventually at the end of the process if one doesn’t already exist in our factory. The ConcreteFlyweight is what gets returned to the client, although it thinks it’s just getting that object back. Oftentimes a client doesn’t know the underlying structure and just has a simple interface but regardless, this is what happens underneath it all.

To refer this pattern’s code, we can read the source code of Flyweight pattern on Github.

Contrast to other patterns

Below is the comparison between the Facade pattern and the Flyweight pattern.