In this article, we will learn how to use the fire-and-forget pattern to improve performance of system with its implementations.

One of the typical benefits of a single-threaded application is ordering. When a process invokes a method, the ensuring lines in that process aren’t run until the invoke method has completed. This natural blocking makes it easier to reason about the state of the process at any given time. It is, of course, expensive.

Consider the scenario where the callee is slow to do its work, but the caller is fast to do its work. Our application pay for this ordering guarantee by slowing the caller down. Indeed, if the caller blocks, then it can never take less time than the callee takes, kind of like being in line at the supermarket, where the caller is standing behind the callee in line. The passing of context back and forth has its costs as well. In the scenario that we are looking at, the originating process doesn’t care about the child process’s outcomes. When we blocks, we obligate the child process to pass context back in the form of a return statement, which is more then we need to do here. The

–> We have piece of information that we need to care about:

In this article, we will learn three options to implement the fire-and-forget pattern. Each give us an opportunity to identify important nuances of the problem, and the potential tradeoffs that each approach offers.

The ThreadPoolExecutor is one of many classes that implements the ExecutorService interface.

The purpose of this interface is to provide an abstraction layer around the management of asynchronous tasks. It addresses several pain points.

With the above code, we will apply the fire-and-forget pattern to send requests to the error queue. The original interface is MalformedIdentityRepository, and an instance of it is invoked at the end of while loop, in catch block.

To keep the code focused on concurrency, the actual implementation of this interface is just a step that waits for a configurable amount of time. In the unit test that executes this code, the wait time for each call to the repository is 1 second in order to make the concurrency gains obvious over very small data sets.

Below we will use ThreadPoolExecutor to implement the fire-and-forget pattern.

ForkJoinPool is new implementation that was introduced in Java 7 to address the concern of unscheduled idle threads. A common misconception in the threading world is that launching something in a separate thread implies that there’s no blocking happening. Indeed, a parent process may block on the results of an asynchronous tasked launched in some descended process. In this situtation, the thread that is executing the parent process is idle, which is suboptional since technically it could keep itself busy doing other work while it waits. 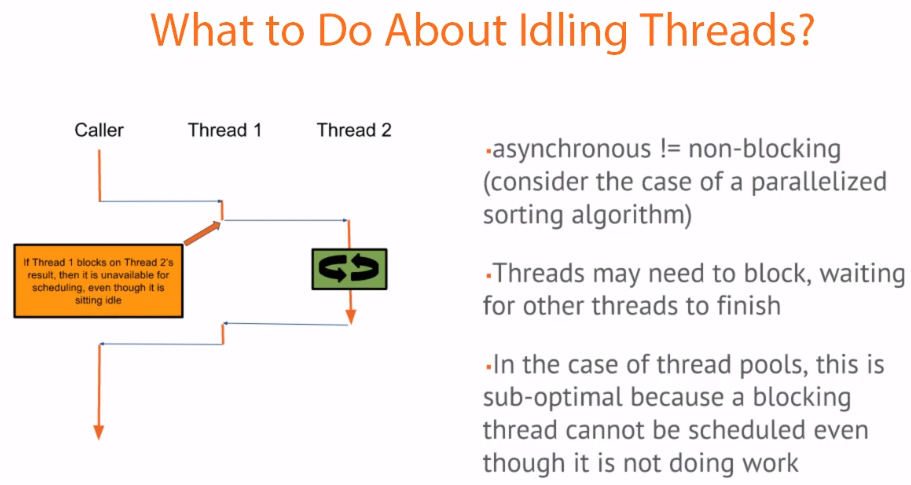 ForkJoinPool, also known as a work stealing pool, addresses this concern. Some features of ForkJoinPool that we need to know:

To appy ForkJoinPool, we should come back our problem in Implementing Fire-and-Forget using ThreadPoolExecutor section.

Secondly, we create an instance of ExecutorService by calling Executors.newWorkStealingPool(). Invoking it with no parameters will return a new ForkJoinPool with a concurrency level equal to the number of CPUs available to the JVM. While switching to ForkJoinPool may offer some performance benefits, the driving reasons for using it are nested concurrency, recursion, …

It’s similar some above section, we will go straight forward to our implementation that uses ThreadRecursion with MalformedIdentityRepository.