In this article, we will learn how to use Event-driven architecture pattern, and apply it in Axon framework. Let’s get started.

When talking about enterprise solution generally, a client-server structure is chosen over other models. The client and server usually reside on separate hardware, so in order to access resources from the server, a communication channel will need to be established over some kind of network.

So, to communicate between other systems, our situation will look like the below image. 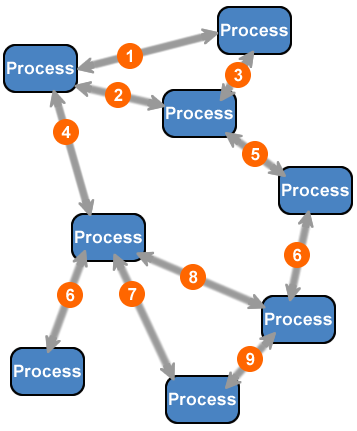 Then, we have the disadvantages of this request-driven architecture.

Continuously, the monolithic application usually uses a layered approach to structure our code where each layer has a specific functionality. The structure of a two-layer application would include a presentation layer represented by a user interface, which translate tasks into something that a user can understand. The data layer is where the information is stored and retrieved, usually a database or some other kind of storage solution. And the business layer where all the business logic resides. This layer controls the application’s functionality by processing and evaluating commands given by the user interface. 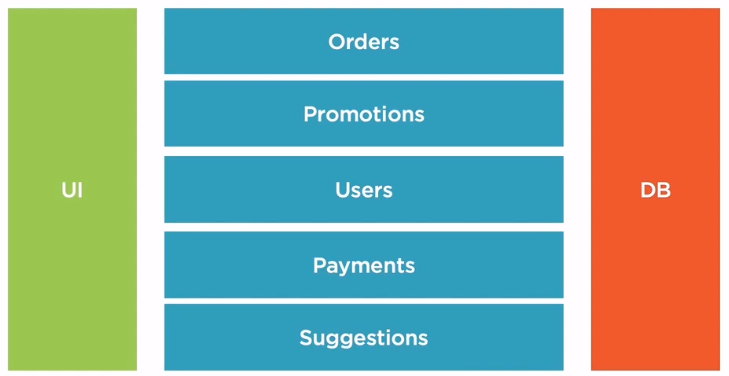 In this scenario, the business layer is composed of multiple modules such as orders, promotions, users, payments, and suggestions. When the number of features increases, so does the complexity of an application, and the cost of maintaining and developing it may become higher.

Considering the previously defined models, transposing them into the microservices pattern would result in independent services. Orders will take and process orders. Suggestions, based on the current items that are in the cart, it can suggest some other items. Users, responsible for authorizing customers. Payments process and manage payments. And promotions, based on some specific rules, the customer can benefit from discount.

In order to ensure loose coupling, having a database per service is essential. Moreover, each service can use the type of the database which is the most suitable. The services are interconnected through some lightweight communication protocol often being REST APIs or RPC. To have a single entry point of entry for the client, an API Gateway is required. An API Gateway will forward all the requests from a client to the appropriate service, but it can include at the same time some features like authentication or monitoring. Microservices are a great solution for the complex systems. But as we can see on the diagram, while the system gets more and more complex, so do the dependencies between services resulting in something called microservices hell.

It all starts with a single request from a client, but in order to complete the request, many other requests are fired across the system making it very hard to track and manage our data throughout the system. To solve this issue, a different way of thinking was required. And so event-driven architecture came into place.

Event-driven architecture is a software architecture pattern promoting the production, detection, consumption of, and reaction to events. In other words, in an event-driven architecture, everything revolves around events and not the data. There are many flavors of programming models that can be encountered in EDA. Among them the most popular is still the microservices pattern where focusing each microservice to handle certain types of events and decoupling them with a broker-based technology. 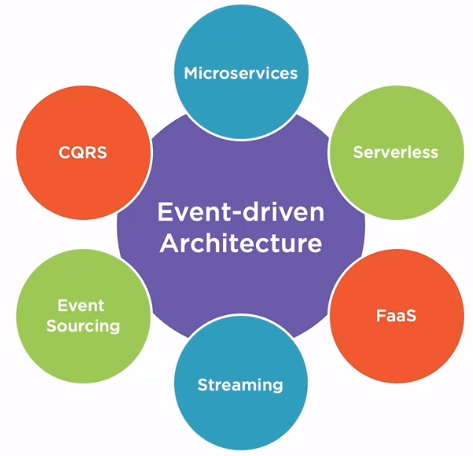 The event-driven microservice architecture can be a great solution for many problems. Serverless application and the now-popular cloud computing services, Faas - Function as a Service can solve problems that require small, short-lived applications. The streaming model is very popular nowadays due to the fact that companies need to respond faster to customer’s needs. While streaming, the events are processed as they arrive in the system, so we can consider a stream as a never-ending operation giving the possibility for companies to react in almost real time. Event sourcing implies storing the data as a sequence of events in recreating the current state based on the log. Try to image a journal in which instead of changing the current balance every time we make a transaction, we write down all transactions that they are making with money. We are always recreate the current state by following the transactions incurred from the beginning until the current moment.

CQRS stands for Command Query Responsibility Segregation, and it works by separating the interfaces for read and write. In a traditional system, both reading the data and writing it are executed through the same set of entities. Using CQRS, the interfaces would be separated and would be exposed over different APIs.

Belows are some concepts that usually uses in EDA.

To understand the way that Event-driven architecture is implemented, we will use Axon framework to deal with it.

We can refer the source code of Event-driven architecture on Github.