HDFS stands for Hadoop Distributed File System, this is basically the underpinning of Hadoop. It actually allows our big data to be stored across an entire cluster in a distributed manner, in a reliable manner, and allows our applications to analyze that data to access that data quickly and reliably.

HDFS is really made/optimized for handling large files that can be distributed and broken up across an entire cluster. If we’re dealing with big data such as big logs of information from sensors or web servers, HDFS can handle it by breaking up those files into blocks and those blocks are actually pretty large that is 128 MB by default. If these files have size that is less than 128MB, then we will have one block. But by splitting up these large files into blocks, we’re not limited by the drive limitations of a single hard drive. So, we can actually store files that are even bigger than what an individual hard drive can store.

HDFS also allows us to distribute the processing of one of these large files. So if we split that large file up across several different computers that they can access different parts of that data and process it in parallel, we can also do things like making sure that the computers that are processing a given chunk of data give a block of that data are physically close to where that block is stored. So it can access it more efficiently.

In order to handle failure, HDFS will actually store more than one copy of each block and so that way if one of these inidividual computers goes down, HDFS can deal with them and actually start retrieving information from a different computer that had a backup copy of that block and it can do this in a clever way such that if a single node goes down. We do not lose any blocks from any given file because there’ll be another block stored somewhere else at all times.

The key point is that HDFS allows us to purchase commodity computers we don’t have to get a special purpose expensive computers that have high availability because as the side effect of this architecture is that if a single computer goes down, it’s not a big deal. We can juset fail over to another node that has a copy of that block somewhere else. 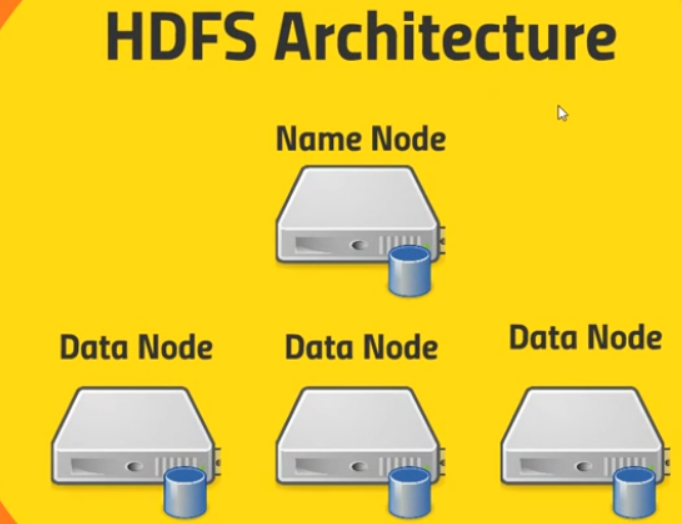 HDFS contains a single Name Node and a set of Data Node.

How to configure factors of HDFS