All information of this article we get from the The Ultimate Hands-On Hadoop course in Udemy website.

After learned completely about Hadoop ecosystem’s concepts, we can understand the sequence steps that we want to do with Big Data.

According to Hortonworks, we have the definition of Hadoop:

With Hadoop’s definition, we need to understand some concepts:

Hadoop wasn’t the first solution for this problem. Quite honestly Google is the grandfather of all this stuff. So back in 2003 and 2004, Google published a couple of papers.

One was about the Google file system GFS and that was basically the foundation of the ideas behind how Hadoop does its distributed storage. So GFS kind of informed what Hadoop’s storage system turned into. MapReduce is also Hadoop’s similar to.

So Hadoop was developed originally by Yahoo. They were building something called Nutch which was an open source we search engine at the time. And primarily a couple of guys Doug Cutting and Tom White in 2006 started putting Hadoop together.

Hadoop was actually the name of Doug Cutting’s kid’s toy Elephant. And apparently this is the actual yellow elephant named Hadoop that the project was named after.

There’s a lot of different ways of organizing these system and this is just what makes sense to us. There are a lot of complex interdependencies between these system, so there’s really no right way to represent these relationships.

So, we will split things up into three general areas like Core Hadoop system which is just things built on the Hadoop platform directly, Query Engines and External Data Storage. Let’s move on the Hadoop core system.

The pink things are the things that are part of Hadoop itself. Everything else is sort of addon projects that have come out overtime that integrate with it to solve specific problems.

Next, we will go to External Data Storage. Our data might be exposed or stored in other places. So, we need to get data from these places to push into Hadoop system. In this External Data Storage, HBase would also fit into this category. But since HBase is really part of the Hadoop stack itself. Then we do not need to consider HBase in it.

–> MySQL, Cassandra or MongoDB, all external databases that might integrate with our cluster.

Finally, we will come in several query engines that sit on top of our cluster. 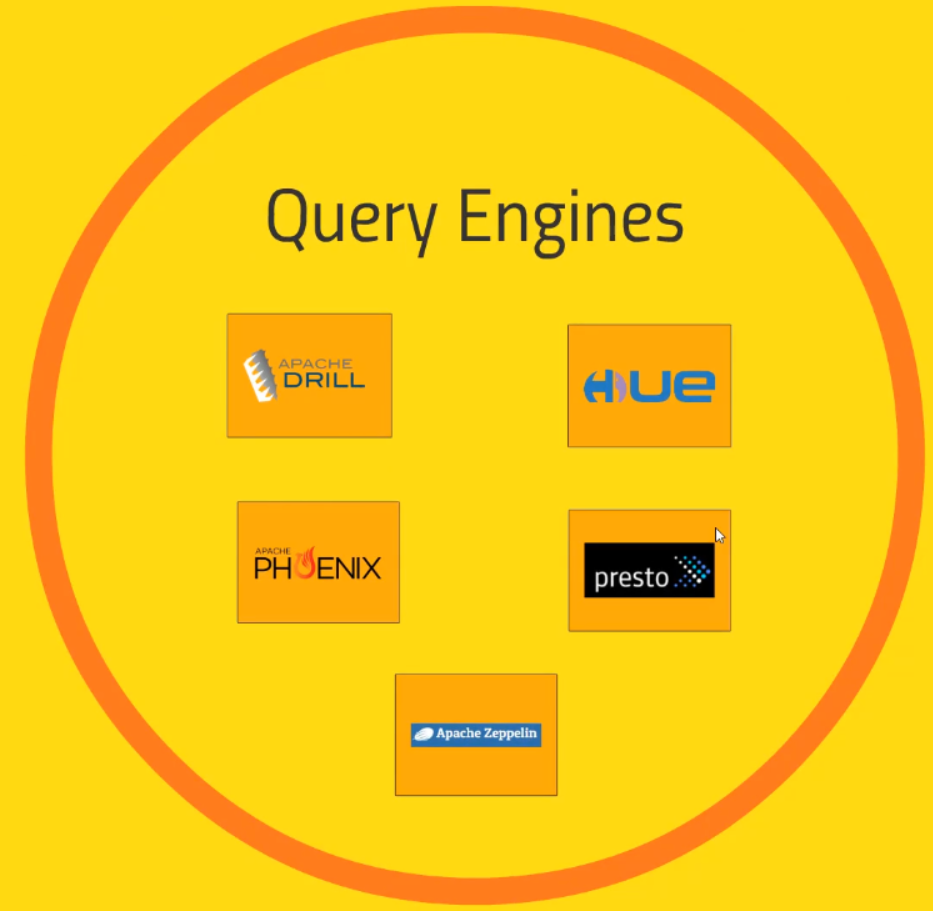