In this article, we will learn about Singleton pattern. This pattern is very common, used in many frameworks such as Spring beans …

So, let’s get started.

When we only need one instance for a class and global access for this instance, simply because this class is responsible for managing one state, or single functionality, … So we do not need to make many instances for their case.

Singleton pattern is a creational design pattern that restricts the instantiation of a class to one object.

In Singleton, there are two ways to create instance. 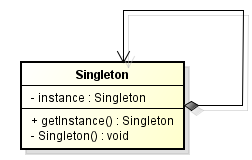 In this UML diagram, Singleton pattern has some parts:

Why not to use

To replace the usage of Singleton, we can use a single instance.

Below is structure of this project. It talks about connections between databases.

In order to implement single instance, we can refer to this link.

Relations with other Patterns

Some thoughts about Singleton

When to use Singleton

Initialization order and how to cope

Some threading implications to Singleton

Explain why double checked locking will not work on C++