Angular 2.x is a platform and framework for building client applications in HTML and Typescript. Angular is written in Typescript. It implements core and optional functionality as a set of Typescript libraries that we import into our apps.

So, in this article, we will discuss about the architecture of Angular 2.x, some parts in this framework.

To understand about the architecture of Angular, we will see the below image: 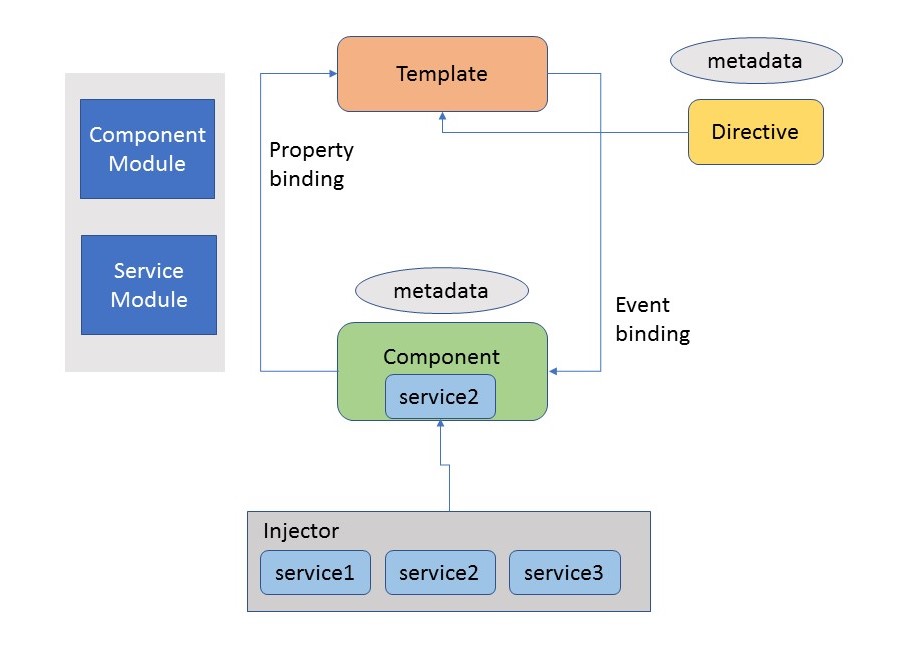 So, we can conclude that there are eight main building blocks.

Module is the block of code which is designed to perform a single task.

Angular apps are modular and Angular has its own modularity system called NgModules.

NgModules are containers for a cohesive block of code dedicated to an application domain, a workflow, or a closely related set of capabilities. They can contain components, services providers, and other code files whose scope is defined by the containing NgModules.

Every Angular app has at least one NgModule class, the root module, which is conventionally named AppModule and resides in a file named app.module.ts. We can launch our app by bootstrapping the root NgModule.

While a small application might have only one NgModule, most apps have many more feature modules. The root NgModule can include child NgModules in a hierarchy of any depth.

An NgModule is defined by a class decorated with @NgModule(). The @NgModule() decorator is a function that takes a single metadata object, whose properties describe the module.

The most important properties are as follows:

The below is source code app module: src/app/app.module.ts

The component is class with the template that deals with the View of application and it holds data and contains the core logic for the page.

With the above code, we have:

Metadata is the way of defining the processing of a class.

In TypeScript, we can define metadata by using decorator.

For example, if we define any component in Angular application, we need to tell Angular that this is the component, by using metadata of the class (using @Component decorator).

The template is the component View that tells Angular how to display the component. It looks like normal HTML.

Data binding is a connection between View and the business logic - View Model of the application.

There are four type of binding:

Service in Angular is a function or an object that can be used to share the data and the behavior across the application.

It is JavaScript function which is used to perform a specific task. It includes the function, values, or any other feature required by the application.

Typical examples of services are logging service, data service, message service etc. There is no base class for service.

Directives are extended HTML attributes. They are markers on the DOM element which provides some special behavior to DOM elements and tell Angular’s HTML compiler to attach. It is a class with directive metadata.

To create directive, we have to apply @Directive decorator on attached metadata to the class.

There are three types of directives:

Dependency Injection is a software design pattern in which objects are passed as dependencies.

It helps us remove the hard coded dependencies, and makes dependencies configurable. Using Dependency Injection, we can make components maintainable, reusable, and testable.

Point to remember about Dependency Injection,