Implementation with file is very crucial for programmer. Master read/write file is obligated with them.

But in Java, it supports so many classes, methods for reading/writing file. It will make you difficult about how to use it. Today, in this article, we will find out something about it, and specify them when to use, which pros and cons of them.

In order to use classes, methods that perform I/O, especially reading, writing file, you must use java.io package. This package support many data such as primitives, object, localized characters, …

IO streams are flows of data that you can read, write.

There are two kinds of stream in Java.

Similiarity with C++, when implementing with files, it has two mode: binary mode, text mode, Java also supports Byte stream and Character stream. But these classes can used in a larger context when comparing with C++.

Belows are the image about a hierachy of classes in Input/Output stream. 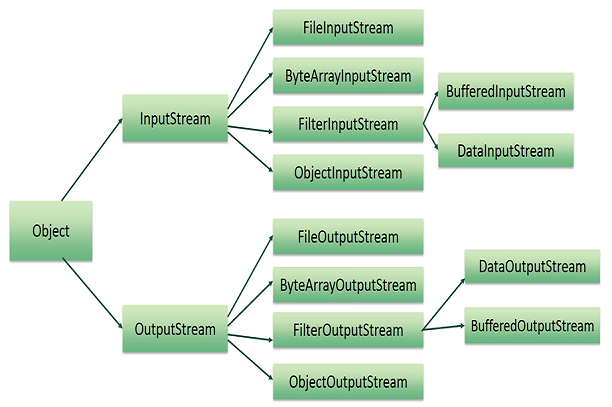 The hierarchical layout is as follows:

Belows are the hierachy of classes in Character streams.

For example: To make the DataOutputStream, DataInputStream, follow the below way:

DataStreams detects an end-of-file condition by catching EOFException, instead of testing for an invalid return value.

DataStreams uses one very bad programming technique: it uses floating point numbers to represent monetary values. In general, floating point is bad for precise values. It’s particularly bad for decimal fractions,because common values (such as 0.1) do not have a binary representation.

The correct type to use for currency values is java.math.BigDecimal. Unfortunately, BigDecimal is an object type, so it won’t work with data streams. However, BigDecimal will work with object streams, which are covered in the next section.

That means that all the primitive data I/O methods covered in Data Streams are also implemented in object streams. So an object stream can contain a mixture of primitive and object values.

When to use Byte streams

When to use Character streams

The difference between FileInputStream and FileReader